This is not your grandmother’s beauty parlor. One client describes the salon as “a juxtaposition between progressive, modern style and retro, older architecture.” Eden Salon and Barbershop, located Downtown since 2011, has a brand distinctively its own – a lofty, urban space that bridges modernity and tradition.

Once home to Maxwell and Dey Bicycles (1901), 12 E. Kiowa retains the charm and character of a historic building, featuring exposed original brick and large wooden beams throughout, updated with modern industrial touches. In the basement, you’ll find a cave-like hallway, an original part of the property. The space is undeniably unique.

If you are looking for a traditional cut and color, massage, makeup or nail services, you’ll find that in one of Eden’s twenty-two independently owned booths. Although the salon is divided into separate areas, the staff functions as a whole. With great intention, owner Lindsey Livingston has designed a business model that might be called collective independence, encouraging creative freedom and exploration of their profession as an art form.

Photo of work by Jenna Bailey

If you want to change it up with bright blue, emerald green, Bubbalicious pink or a combination of all your favorites in the color wheel, you’ve come to the right place. Eden Salon and Barbershop is home to three members of the exclusive Unicorn Tribe. With only 250 members world-wide, Eden has the largest concentration of artists in one Colorado salon. The Unicorn Tribe is a family of fearless artists that embrace color with a vengeance. Using hair as a canvas, they create vibrant, eye-popping color. Eden’s Unicorn Tribe members include Heather Jeffrey, Lizzy Palaski, and owner Lindsey Livingston. Eden also offers mohawk highlights, one of a kind undercut designs, eyelash extensions, bridal services and photo shoots after you’ve been glammed up. Think Glamour Shots, but WAY cooler.

Jenna Bailey, who works from her mermaid loft overlooking the main level, describes another benefit of working at the salon – the focus on community. “I truly enjoy working at Eden because I can freely operate my small business the way I choose. But I am also part of an amazing team, an artist community. We collaborate in industry education and also in giving back to the community.”

Since opening the doors in 2005, helping others has been part of the mission. “It is just written into my soul,” Livingston says. She launched Eden’s Angels, a nonprofit organization that has partnered with The Cystic Fybrosis Foundation, TESSA, Family Lighthouse Services, Community Prep School, Just Be Colorado, and St. Baldricks “Bald for Bucks” program.

Photo from  “Through the Looking Glass.” Courtesy Eden Salon & Barbershop

In October, Eden’s Angels put on “Imagine: A Tribute to Tim Burton,” a collaboration of local hair, makeup, and fashion creatives. Proceeds from the 2017 show were donated to Just Be Colorado, an organization that works to empower individuals battling cancer.  Talent and limitless inspiration strolled the catwalk mirroring some of Burton’s most celebrated characters including Edward Scissorhands, the White Queen, and the Corpse Bride. Catch a glimpse of the 2016 show, “Through the Looking Glass,” here. 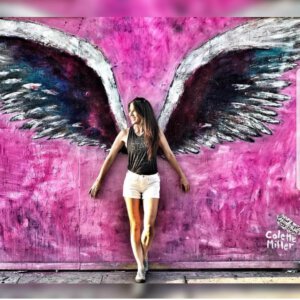 Livingston’s most recent venture is the Angel Wall. Eden will partner with the Downtown gallery Art 111 in a community art project that she envisions will transform the west alley of her building into a gallery of angel wings. “We want this to be a wall where people can come, take pictures and tell their story.” Local artists Andrew Lanham and Jantzen Peake have agreed to paint three sets of wings similar to those pictured. The Global Angel Wings Project launched in 2012 by Colette Miller has launched a trend across the globe. Livingston plans to host an event in the spring for the community to watch the Angel Wall come to life during a live demonstration.